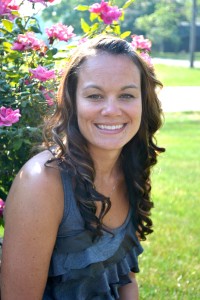 Erica Barnard has been employed at Wee Wisdom since June of 2006.  She was a junior at Ball State University majoring in Elementary Education with a Kindergarten concentration.  We hired her as a child care assistant and she continued in that role until she graduated with her Bachelor of Science in July of 2007.  At that point, much to our delight, she decided that she did not want to leave Wee Wisdom to pursue a teaching position in the public school system.  She chose to remain at Wee Wisdom and was offered a teaching position in the Nursery School working with our five year old students.  She has remained in that role through the present time and teaches both sections of Pre-Kindergarten Monday through Thursday.  In 2010, she also began teaching both sections of our Toddler Classes of two year old students on Friday mornings.  So, Mrs. Barnard is the first teacher your child will have as a two year old and the last teacher your child will have as a five year old.  She sends them off to kindergarten prepared to tackle the world!  They leave us at age five as confident learners who are more than prepared for kindergarten.  In the summer months of June and July, you will find Erica at Wee Wisdom’s pool providing swim lessons in the mornings and supervising group swim in the afternoons.  And yes…she is licensed lifeguard too!  What can we say…she is awesome!!  Erica has two children, Hadlee and Boston, who both attend Wee Wisdom.  She is a busy single Mom who enjoys family time and making special memories with her children.  She enjoys reading Nicholas Sparks books, spending time with her friends, and visiting new places, including local and Indianapolis restaurants and annual community events associated with Meridian Health Services.  (Ducky Derby and Rialzo)  She is a big fan of sporting events and especially enjoys attending Michigan football games.  Erica is an exemplary teacher and is a big part of our success as a private preschool.  We value her as a teacher and as an excellent role model within our organization.  She is very much loved and respected by each little student and their parents who have the privilege of her guidance and instruction.  You are LOVED and APPRECIATED each and every day!!

On My Way
Pre-K